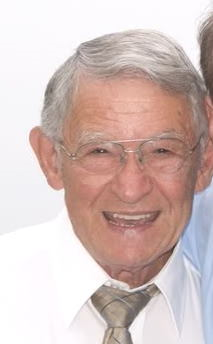 Please share a memory of John to include in a keepsake book for family and friends.
View Tribute Book
Age 91, passed away peacefully, at the Chemung County Nursing Facility, with his family by his bedside, on Friday, July 22, 2022. John was born in Elmira, a son of Antonio and Incornato Gallo Corsi. He was predeceased by his first wife Regina Crowley Corsi; daughter Cindy Corsi Collins; grandson Justin Collins; and 9 siblings. John is survived by his second wife, Mary Carrozza Jones Corsi; children with their families, John "Mickey" Corsi and Cynthia Evans of Interlaken NY … Daniel and Christa Corsi of Charlotte NC with their sons, Christopher, Zackary and Ryan … David and Chelle Corsi of Webster NY with their daughters, Richelle (Kathryn) and Nicole … Cindy's husband Mark Collins with their children, Trevor, Katie and Nikki; great grandchildren, Ava and Jack Collins; step-children with spouses, William and Victoria Jones of Saratoga Springs NY, David and Melissa Jones of West Henrietta NY, Merrick and Maureen Jones of Raleigh NC; step-grandchildren, Zackary, Ryan, Jared, Emma, Meredith, Margot, and Maren Jones; brother and sister-in-law Carmen and Mary Ann Corsi of New Jersey; numerous nieces and nephews. John was a devout Catholic. He was a lifelong active communicant of St. Anthony's Church until its closing. He led the rosary at St. Joseph's Hospital Chapel for many years. John was a 1949 graduate of Elmira Free Academy. He had a long career at the Mark Twain Golf Course that started while he was still in high school. It was interrupted from 1951 to 1953 when John enlisted in the United States Marine Corps and fought in the Korean War. At Mark Twain, John served as Greenskeeper/Superintendent from 1963 – 1985 and as Golf Course Manager from 1986 until his retirement in 1995. In 1996 John transitioned into Elmira City government when he was elected and served as 3rd District City Councilman until 2011. From 2008 – 2011 John also served as Deputy Mayor for the City of Elmira. Always looking out for the best interest of the people of Elmira, he accomplished many good things during his tenure in politics. John was always very active in the Elmira community. He served on the Notre Dame High School Board of Directors for 12 years, served on the Arctic League Board of Directors since 1989 and was the Arctic League President in 1999. He belonged to many clubs and organizations including, Italian American War Vets (Charter Member), Horseheads Elks Club, Knights of Columbus (4th Degree), John W. Jones Museum, Friends of Woodlawn Cemetery, Woodlawn Youth Center, White Eagles Club, and Horseheads American Legion Post 442. Summers for John were spent on Keuka Lake. A place to relax and enjoy time with family and friends. John was a life-long avid New York Yankee fan. Family and friends are invited to McInerny Funeral Home, 502 W. Water St., Elmira, on Tuesday, July 26, 2022 from 4:00 p.m. to 6:00 p.m. A Mass of Christian Burial will be held at St. Mary's Church, 224 Franklin Street, Elmira, on Wednesday, July 27, 2022, at 12:30 p.m. Committal prayers and interment, with military honors, will follow at St. Peter and Paul's Cemetery. A livestream of the Mass will be available through the Facebook page for Most Holy Name of Jesus Parish (https://www.facebook.com/ElmiraCatholic). Those wishing may honor John with a donation to The Arctic League, P O Box 113, Elmira NY 14902, John J. Jones Museum, P O Box 932, Elmira NY 14902 or The Food Bank of the Southern Tier, 388 Upper Oakwood Avenue, Elmira NY 14903. The Corsi family would like to extend their sincere thanks to the Chemung County Nursing Facility for the wonderful care provided to John over the last 18 months.
To send flowers to the family or plant a tree in memory of John Corsi, please visit Tribute Store
Tuesday
26
July