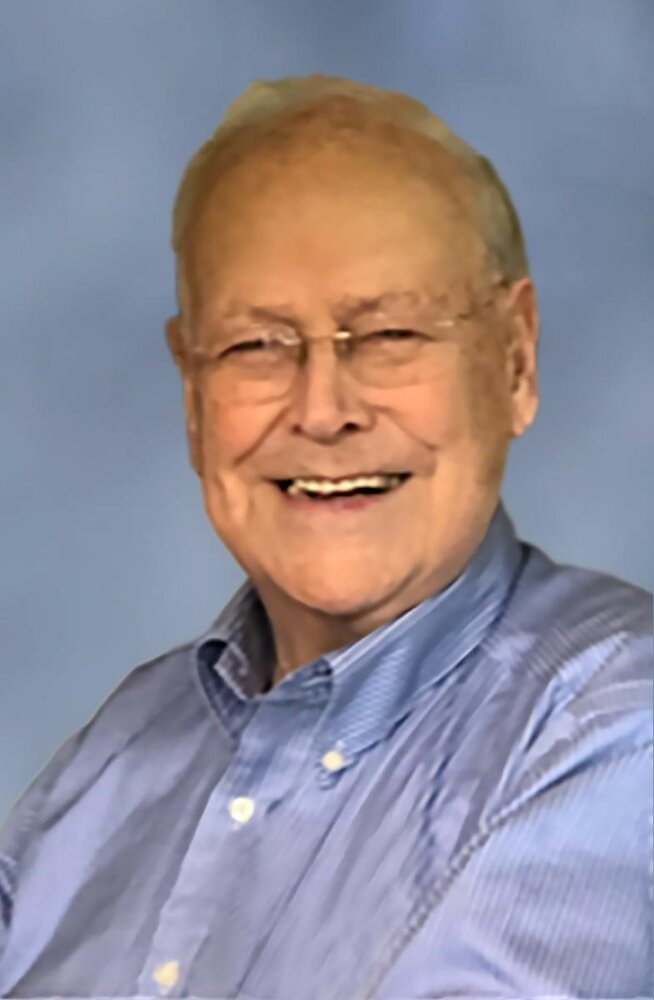 Please share a memory of Joseph to include in a keepsake book for family and friends.
View Tribute Book
Age 95, died on April 6, 2022 at his daughter’s home in Penn Yan. Joe was born in Montour Falls, New York to Seth and Marguerite (Lathrop) Baker. Early on, he showed gifts of leadership, ingenuity, and hard work; developing a lifelong ability to recognize opportunities. During the Great Depression, when he was in high school, he worked at the famous Glen Springs Resort, the local service station, selling racoon tails to tourists, delivering wedding cakes for a local bakery, organizing school dances, and much more. Joe graduated from Watkins Glen High School in 1943. The day after graduation, he was inducted into the United States Navy as an officer after receiving Congressional approval, which was required because of his youth. As an Ensign, Joe was assigned to the USS Block Island, an aircraft carrier in the Pacific Theater. Joe served as Chief of its Repair Division, enduring the Battle of Leyte Gulf. Although he was one of the last surviving veterans of World War II, Joe’s focus was always on those who gave their lives during the war, particularly on his ship, and not on his own service. After the war, Joe graduated from Hobart College in Geneva, New York in 1948 with a Bachelor’s of Science in Business Administration, and later from Rutgers University School of Law While in law school, Joe met the love of his life, then Mary Elizabeth (Bette) Wigsten. Joe and Bette were married on September 9, 1950 at St. Mary’s Church in Elmira, New York. As they began their family, Joe began his career at Westinghouse Electric in Horseheads as an entry level purchasing buyer. In the evenings at his and Bette’s home, Joe would meet with his law clients. Joe had a long and successful career with Westinghouse and ABB, a Swiss energy conglomerate. He rose from that first position at Westinghouse to Vice Chairman of the ABB Power T&D Company. He and Bette made many lifetime friends from his relationships with colleagues and neighbors from Elmira, New York to Hermitage, Pennsylvania to Bloomington, Indiana to Pittsburgh, Pennsylvania and finally to Wayne, Pennsylvania. He was an elected Officer of Westinghouse Electric Company and was awarded the Order of Merit for his lifetime of leadership success for the company. In retirement, Joe and Bette visited their children and grandchildren, travelled widely, designed, built and enjoyed their vacation home on Keuka Lake and always warmly welcomed family, friends and neighbors into their home and lives, no matter where they were. After Bette died, Joe showed a remarkable ability to carry on, joining Silver Sneakers at the YMCA, continuing to attend daily Mass and regaling his friends with Saturday stories from his days at Westinghouse. Family mattered the most to him. He loved holiday gatherings, visits from children, grandchildren and their friends, crossword puzzles, playing Cribbage and Mexican Train dominoes and he never passed up the opportunity to counsel, advise, suggest, and cajole others on issues he knew were important to that person. In his later years, he thoroughly enjoyed “Movie Saturdays” and “Football Sundays”, as well as Keuka’s beautiful scenery and the stars outside his window. He made a positive impression on everyone he met. He made a great difference in our lives and the lives of many others. In addition to his wife and parents, Joe was predeceased by his siblings, Dorothy Koenig; Orlo Baker; and Helen Louise Chamberlain. He is survived by his six children and their spouses: Mary Baker of Houston, Texas; Joseph and Dianne Baker of Vero Beach, Florida; David and Lisa Baker of York, Pennsylvania.; Anne and Frank Miller of Penn Yan, New York; Mark and Lisa Baker of Hummelstown, Pennsylvania; and John and Mary Baker of the Lehigh Valley, Pennsylvania. He is also survived by sixteen grandchildren, a great-granddaughter, his sister-in-law, Catherine Hughes, and his brother, Paul A. Baker. We are enormously grateful to his caregivers, the staff at Guthrie Robert Packer Hospital, Hailey Foster and Ashley Peterson for their skill and great kindness in caring for him. Services will be held at the McInerny Funeral Home, 502 W. Water St., Elmira, NY, on Wednesday April 13, 2022. Calling hours will be from 10:00 a.m. to 11:00 a.m. A funeral service will follow at 11:15 a.m. In lieu of flowers, contributions can be made to the Keuka Comfort Care Home in Penn Yan, New York.
To send flowers to the family or plant a tree in memory of Joseph Baker, please visit Tribute Store
Wednesday
13
April