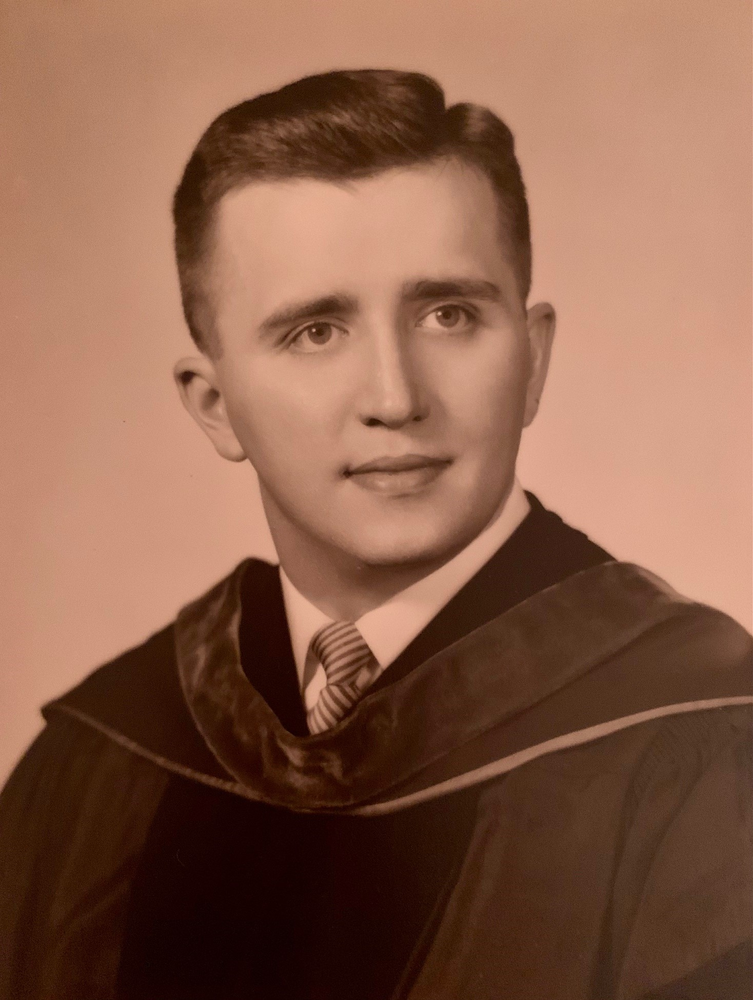 died on November 13, 2020 at Appleridge Senior Living, Horseheads, New York, surrounded by his loving family. Vincent was born on December 27, 1929 in Corning, New York to Vincenzo and Margherita Sementilli. He married Eleanor Grace on June 28, 1952, at St. Patrick's Church in Elmira. Vincent attended St. Mary's School and graduated from Corning Free Academy in 1947. He attended Fordham University and the University of Buffalo, graduating from the University of Buffalo School of Dentistry in 1954. After completing an internship at the Veterans Administration Hospital in Buffalo, Vincent joined the US Army Dental Corps and was stationed in Fort Dix, New Jersey at the rank of 1st Lieutenant. During his tour of duty, he was promoted to the rank of Captain. After his discharge in 1958, Vincent and his family moved to Corning where he began his dental practice. Vincent practiced dentistry for 43 years. He was delighted when his son John joined the practice in 1985, where they worked together for sixteen years. Vincent retired in 2001. Vincent devoted a great deal of time and energy to the education of Corning area students. He, along with the late Louis Nessle, founded the first St. Patrick's School Parent Teacher Organization. Vincent also served on the Corning Painted Post Board of Education for several years. In 1975, he was appointed by then-Gov. Hugh Carey to serve on the Corning Community College Board of Trustees, subsequently becoming Board Chairman. Vincent also served on the boards of various charitable organizations: the Corning Family Service Society, the Corning Area Public Library, and the Corning Chapter of the American Red Cross. In addition, he was an active member of the Steuben County Dental Society and was a longtime member - and a Paul Harris Fellow - of the Corning Rotary Club. Vincent was a parishioner of The Most Holy Name of Jesus Parish in Elmira, attending both SS Peter and Paul and St. Patrick's Churches. He was also an Oblate of Mount Saviour Monastery in Pine City. In addition to Eleanor, Vincent is survived by four sons: Vincent, Mark (Audrey), Robert, and John; two daughters: Mary Catherine (Joseph) Ruocco and Mary Elizabeth (Brian) Bennett; and one granddaughter: Carolyn Ruocco (Charles Cox). Vincent was predeceased by his infant sister Mariangela, and his brothers Angelo and Philip. He is survived by his sister and brother-in-law Mary and Howard Orr; sisters-in-law Leona Sementilli, Pietrina Sementilli, Mary D'Ambrosia, Margaret Grace, and Patricia Grace-Farfaglia; many nieces, nephews, and cousins; and his special flower girl, Kathryn Amey Bosseler. The Sementilli Family would like to thank the kind and dedicated caregivers from Homemakers of Western New York, especially Joann Parker. The family would also like to thank Julie Reilly for her devoted care over the years. Finally, the family would like to thank Care First New York for their compassionate care. Due to the COVID-19 pandemic, funeral services will be private. A Memorial Mass and reception will be held at a later date. In lieu of flowers, please consider donations to the Corning Area Food Pantry, The Southern Tier Food Bank, the Corning Library, Care First New York, Mount Saviour Monastery, or the charity of one's choice.
To plant a tree in memory of Vincent Sementilli, please visit Tribute Store

Share Your Memory of
Vincent
Upload Your Memory View All Memories
Be the first to upload a memory!
Share A Memory
Plant a Tree