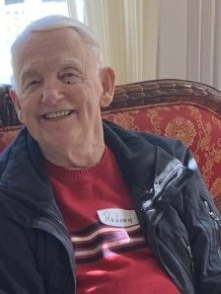 Elmira: Age 80, passed onto glory on Thursday, November 12, 2020 at Robert Packer Hospital. Rod was born in Aaronsburg PA a son of Lester Miles Guisewite and Anna June Guisewite. He is predeceased by his siblings, Larry L. Guisewite, Veta Pauline Guisewite and infant sister Anna A. Guisewite. Rod is survived by his siblings: Marline Guisewite Kennedy and her husband William of Chincoteague Island VA, Floretta Grace Miller of Tylersville PA, and Kenneth L. Guisewite and his wife Donna of Rebersburg PA; beloved friends, Robert Bennett and Roger Laughlin of Elmira; along with nieces, nephews; and family pet Jeepers. Rod was a graduate of Penns Valley High School in 1958. He then served his country in the U S Air Force from 1958 – 1963. While in the Air Force he was a surgical technician, continuing with this career path at Divine Providence Hospital in Williamsport PA, after his military service. Rod was a renaissance man…he enjoyed reading, cooking, good conversation, and excelled at gardening and collecting antiques. He was a Master Gardener with Co-operative Extension and co-owner of Mark Twain Country Antiques, in Elmira, with Robert Bennett. His beautiful home was featured several times on the Near Westside Garden Tour and Christmas Tour. After closing the antique store, Rod could be found helping out at estate sales with Debbie and Pete Peterson and Charlotte Manikowski of Next Chapter Sales. A man of faith, Rod's eternal life is blessed for having accepted the Lord, Jesus Christ, as his Savior. Rod's buddy Jeepers will be missing her daily walks along the Chemung River that Rod faithfully took her on, rain or shine. A celebration of Rod's life will be held at a later date. Those wishing may remember Rod with a donation to the Chemung County SPCA, 2435 Route 352, Elmira NY 14903.
To plant a tree in memory of Rodney Guisewite, please visit Tribute Store

Share Your Memory of
Rodney
Upload Your Memory View All Memories
Be the first to upload a memory!
Share A Memory
Plant a Tree