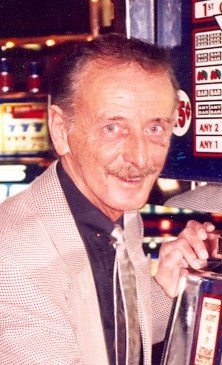 Plant a Tree
Share this Tribute:
Share Obituary:
Share Your Memory of
Ralph
Upload Your Memory View All Memories
Be the first to upload a memory!

Ralph F. Moffe December 15, 1929 - September 8, 2020 Horseheads: Age 90, passed away on September 8, 2020 with his family by his side. Ralph was born on December 15, 1929 in Elmira, NY, the youngest of ten children to Nicholas and Madeline (Malone) Moffe. He grew up on Pearl Place in “the Patch” and attended St. Anthony’s school through the 8th grade. He later joined the U.S. Navy where he served honorably for twenty-eight years, recently earning an “Honorary Chief Petty Officer” award for his longtime service to his country as well as Naval mentorship to five of his nephews. In addition to his service to our great country, Ralph was employed with the United States Postal Service for 30 years and served as a co-owner of Cozy Corner in Elmira from 1969-1974. He was lifetime fan of the New York Yankees and his passion for bowling and golf over the years allowed him the honor of rolling a perfect score of 300 and a hole-in-one at Soaring Eagles golf course all on the same day at the age of 78! Who would have thought his early days working as a pinsetter at Rossi Lanes would have taken him so far! In fact, Ralph’s love of bowling found him working the lanes on weekends well into his 80’s. Ralph enjoyed his beloved canine companions, Marty and Maddie, sunbathing, trips to Las Vegas with his wife Joan and family as well as cruises to the Caribbean. He also enjoyed a good cup of coffee and good conversation at the “circle” table at Cozy Corner with good friends, old and new. His smile and sense of humor will be deeply missed by all who had the pleasure of knowing him. Ralph is survived by his daughter Marcy Straight (Tom) of Elmira, NY and his son Carl Moffe (Shelly) of Rochester, NY, as well as grandchildren Shaun Moffe (Cory) and Trista (Pat Knaus); great grandchildren; Trevor, Charlotte, Archer, Delilah and Esjay as well as numerous nieces, nephews, cousins and friends. Ralph’s wife of 56 years, Joan pre-deceased him in 2011. A special thank you to Dr. Roberto Mauri and Dr. Robert Douenias for the kind, compassionate care they provided to Ralph over the years. Family and friends are invited to McInerny Funeral Home on Sunday, September 13, 2020 from 2:00 p.m. - 4:00 p.m. A Mass of Christian Burial will be held on Monday, September 14, 2020 at St. Patrick’s Church at 10:00 a.m. Interment with committal prayers and full military honors will follow at St. Peter and Paul’s Cemetery. Donations in Ralph’s memory may be made to: Chemung County SPCA, 2435 State Route 352, Elmira, NY 14903.
Plant a Tree
Print
Sunday
13
September