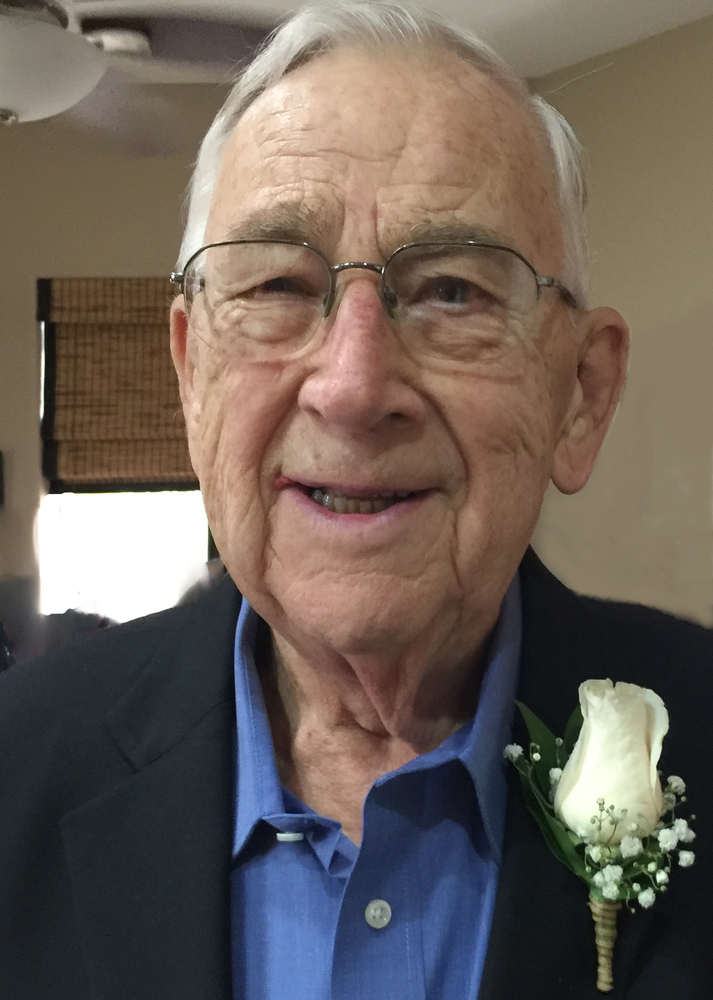 Age 92 of Rochester, NY formally of Elmira, NY, passed away on December 29, 2019. Emory was the sixth of eleven children born in Rome, PA to Arthur and Geneva (Granger) Bennett. He was the husband of the late Margaret (Fischer) Bennett, whom he married on August 20, 1955. In addition to Margaret, he was predeceased by his siblings Albert (Fay Swope) Bennett, Carl (Augusta Criss) Bennett, Dorothy (Stanley) Field, Clarence Arthur, Arthur, Junior, Lorraine, Phyllis and Lloyd Bennett. Emory is survived by his four daughters Mary Susan Bennett (Marylynn Mariano) of Rochester, NY, Cynthia A. Bennett of Chester, MD, Julie B. McInerny of Elmira, NY, and Karen B. Anger (Anthony) of Queen Creek, AZ. Also surviving are his sisters Blanche Carlin of Florida, Evelyn Atilio of Tennessee, and Rowena Campbell of Elmira; grandchildren include Maribeth Robinson of Rochester, Meaghan Rodeck (Nicholas) of Arizona, Joseph McInerny (Mariah) of Corning, Bryan C. Anger (Britny), Justin E. Anger and Margaret C. Anger all of Arizona; great grandchildren Aubriella Moretz and Juliana McInerny of Corning and Liam Rodeck of Arizona; many nieces and nephews. Emory grew up in Rome and attended Rome Central School through the eighth grade receiving a commendation for eight years of perfect attendance. The family moved to Elmira where he attended Elmira Free Academy through his junior year. On his seventeenth birthday Emory joined the U.S. Navy and served his country on the USS Mispillion (A fleet oil tanker). They traveled through the Panama Canal to join the Seventh Fleet in the Pacific Ocean. After a year of service Emory was honorably discharged. He returned to Elmira to finish his education, graduating from EFA in 1947. He was working for the A&P Company while attending the Jean Summers Business School. Emory and his brother Albert joined the Navel Reserves Unit stationed in the Brooklyn Navy Yard where he was responsible for financial and bookkeeping records. He was later transferred to the Naval Air Station in Alameda California where he returned to reserve status. Emory went to work for Westinghouse in the accounting department at the facility in Horseheads. Little did he know that this job would lead to meeting his wife. Margaret worked for Westinghouse where both Margaret and Emory bowled for the company teams. Emory asked Margaret for a date and they were married for 63 years. Emory worked for Westinghouse for 36 years at many different locations including Bath NY, Thousand Oaks CA, Pittsburgh PA, Sharon PA, and Bristol VA to name a few. During that time, he continued his education taking courses through several colleges including Elmira College. He continuously trained through many seminars offered through Westinghouse. He returned to the Horseheads plant in 1979 as a Division Comptroller with part of his responsibilities included working with off-shore accounts. He was able to include his wife, Margaret, on many of his trips to places such as London and Ireland where she served as a hostess. He retired from Westinghouse in 1988, returning as a consultant for Westinghouse and Toshiba Display through 2000. 1979 was the birth of the LPGA Corning Classis which was supported by Westinghouse. Both Margaret and Emory signed on as volunteers and continued that service through 2005. Emory and Margaret worked on many different committees. Emory served as Chair of the Transportation Committee for the last 7 years of his volunteer services. In 2002, Emory was named Corning Classic Volunteer of the Year, an honor he cherished. Emory and Margaret were members of Corning Country Club where Emory served on the Board of Trustees, his final 2 years as president. When Emory was transferred to the many locations for work, he always joined the local Catholic Church where he was asked to share his expertise serving on the Finance Committee for the Catholic Schools as well as for the churches. He would seek out and join the local country club so he could enjoy his favorite pastime, golfing. He continued to golf on a regular basis until he could no longer play the caliber of golf he enjoyed. As a part of his employment Emory was able to golf with his customers on such courses as Pebble Beach, Spy Glass, and Harbour Town. Family and friends are invited to McInerny Funeral Home, 502 W. Water St., Elmira, on Thursday, January 2, 2020 from 4:00 p.m. to 7:00 p.m. A Mass of Christian Burial will be held at Our Lady of Lourdes Church in Elmira on Friday, January 3, 2020 at 11:00 a.m. Committal prayers and interment, with military honors, will follow at St. Mary Our Mother Cemetery in Horseheads. In lieu of flowers, it was Emory's request that donations be made to the American Cancer Society or a charity of your choosing.
To plant a tree in memory of Emory Bennett, please visit Tribute Store
Thursday
2
January

Share Your Memory of
Emory
Upload Your Memory View All Memories
Be the first to upload a memory!
Share A Memory
Plant a Tree