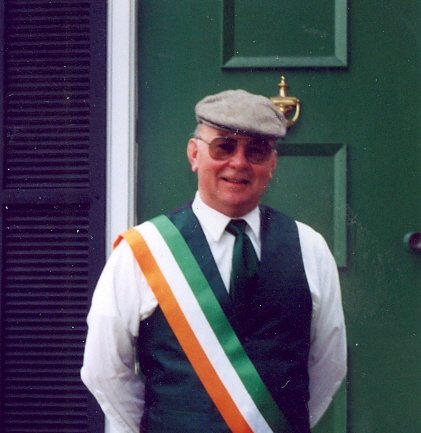 age 85, passed away January 24, 2019 at his home surrounded by family. Born February 6, 1933 the eldest son of Edward J. and Eleanor (Pike) O'Connell of Chicago, Illinois. Ed grew up in Cleveland, Ohio, attending St. Ignatius for 3 years and graduating from St. Edward's High School. He also attended John Carroll University before entering military service with the US Army in 1953. After serving he joined the sales force at R.J. Reynolds Tobacco Company where he worked for more than 35 years. During that time the family lived in Ogdensburg, NY until moving to Elmira in 1970. Ed was a longtime devoted communicant of St. Patrick's Church where he was a member of the Legion of Mary and the Perpetual Adoration Society. He was also inducted into the John J. Lee Division of the Ancient Order of Hibernians. His other interests included football (a rabid University of Notre Dame fan), photography, history and anything pertaining to Mark Twain. He was also an avid reader. Ed loved any activity his children or grandchildren were involved in and he rarely missed an event. He was their biggest fan. Edward was preceded in death by his wife of over 50 years Charlotte (Kotel) O'Connell, brother Richard O'Connell and grandson Edward J. O'Connell, IV. He is survived by eight children and their spouses: Charles Ramos of Lyons Falls, NY, David & Betty O'Connell of Pompano Beach, FL, Carrie & David Drew of Toccoa, GA, Maureen & Charlie Burke of Elmira, Patrick & Janeen O'Connell of Daytona Beach, FL, Edward J. III & Barbara O'Connell, Mary & Patrick O'Connor, Jennifer & Patrick Griffin all of Elmira; sister Sheila Flynn of Cleveland, OH and cousin Jim (Mary Anne) O'Connell of St. Louis, MO. There are 35 grandchildren & great-grandchildren. Visitation will take place at McInerny Funeral Home on Thursday, January 31, 2019 from 4:00 pm to 7:00 pm. A prayer service will be held there Friday, February 1, 2019, at 9:45 am, followed by a Mass of Christian Burial at 10:30 am in St. Patrick's Church. Military honors will be accorded outside of church at the conclusion of the Mass. Committal prayers and internment will take place at St. Peter and Paul's Cemetery at a later date. Memorial donations can be made to the Most Holy Name of Jesus Parish, 1010 Davis St., Elmira, NY, 14901 or the Ancient Order of Hibernians, 701 Kinyon St., Elmira, NY 14904. Officers and members of the Ancient Order of Hibernians will meet at the McInerny Funeral Home on Thursday at 7:00 pm to conduct a memorial service for our departed brother Ed.
To plant a tree in memory of Edward O'Connell, please visit Tribute Store
Thursday
31
January

Share Your Memory of
Edward
Upload Your Memory View All Memories
Be the first to upload a memory!
Share A Memory
Plant a Tree