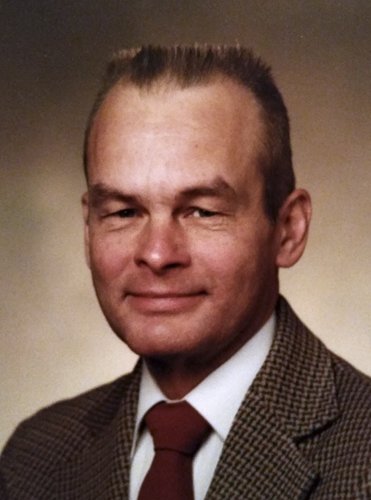 Please share a memory of Dale to include in a keepsake book for family and friends.
View Tribute Book
Elmira, Age 83, passed away on February 10, 2015 with family members by his side, after a brave battle with cancer. A long-time resident of Spencer, New York, he was born in Chicago, Ill. on May 16th 1931. His wife Audrey of over 60 years pre-deceased him in 2013. He was a devoted and loving father of Steve Johnson, Elmira, James Johnson and Wayne Johnson, North, South Carolina. He has two grandchildren; Erik Johnson, Ithaca, and Ashley Johnson, Virginia Beach, Virginia and two great-grandchildren, Catalina and Logan Johnson, Elmira. He is also survived by Cindy (Johnson) Pellor, Karen (Johnson) Emnett and Ed, Lansing, NY, Colleen Johnson, Knotts Island, NC, Amanda (Johnson) Peterson and Dave, Elmira. Dale served in the United States Navy during the Korean War before working with and retiring from IBM, where he was involved in the Apollo Mission of putting man on the moon. He also worked as a trainer of defense mechanisms for the Air Force. His interests included baseball, football, photography, drawing, wood-working, astronomy, gardening and spending time with his family. Dale will be buried with Audrey in the Halsey Valley Cemetery at a later date. In lieu of flowers, please make donation to Care First, formally known as Southern Tier Hospice &amp; Palliative Care.
To plant a beautiful memorial tree in memory of Dale Johnson, please visit our Tree Store