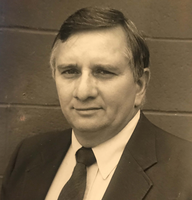 John Jude Herrick passed away on January 5th , 2021 at the age of 83. John was born in Elmira, New York to Albert and Adele Joseph Herrick on November 30th, 1937 at St. Joseph's Hospital. He attended St. Cecelia's and Elmira Free Academy and graduated from Southside High School in 1957. John is predeceased by his sister Mary Ann Vicario, brother William Herrick, brother-in-law, Eugene Vicario and sister-In-Law, Margaret (Peggy) Herrick. He is survived by children, Mark (Chris) Herrick, Michael (Kristie) Herrick and Jennifer (Robert) Herrick-McGonigal, former wife Virginia Snyder Herrick (also his best friend in the world); five loving grandchildren, Ashley Herrick-Marks (Rick) with their daughter Casey; Megan Herrick (Jon Schesling), Sophia Herrick, Olivia Herrick & Jude Herrick; and his loving companion, Deborah Nicholson and her family. Also survived by many dear cousins, nephews & nieces. John was in the Marine Corps (Semper Fi) for 4 years, serving at the Naval Weapons Station in Yorktown, VA, where he carried out supervisory duties as part of a highly sensitive security system and was on a ship off the shore of Cuba during the Cuban Missile Crisis. Following his years in the Marines, John returned home and worked as an Account Executive for John Hancock Insurance. Dedicated to his community and the news, John became an instrumental figure in WENY-TV's live broadcasts from the station's original location in the Mark Twain Hotel. When the station was relocated to larger modernized production facilities in Horseheads, he became the local producer of the Jerry Lewis Muscular Dystrophy Telethon and the Arctic League Telethon when these were first televised, serving in this role for many years. He eventually became News Director of WENY-TV's local news, where he hired many broadcast personalities who remained in close contact with him over the years. John also worked for WETM-TV and WIDT-WQIX. In 1983, he launched Campus Pizza with his wife Ginny and his children where his motto was "We're only as good as our last pizza". He loved all of his employees and considered them family. Many of his employees nicknamed him "Johnny Law". His sons, Mark & Michael, with family, recently reopened Campus Pizza to honor the reputation that their parents created with the business. Passionate about politics and committed to community service, John served two terms as Councilman of the 5th District on the Elmira City Council, where he was determined to make his neighborhood and City of Elmira a better community. He was quoted to say as City Councilman "My advice is keep up the good work and ignore the rhetoric. Negativism and non-involvement has never accomplished anything." John Herrick was a highly recognizable local personality and leading citizen in Elmira beloved by many people. A gregarious person by nature, he had a tremendous sense of humor and a distinctive laugh by which anyone could immediately identify him in a crowded room. The lifelong friendships he inspired were dear to his heart, second only to the deep love of his family. From his yearly gatherings with his Eastside 5th ward friends to poker buddies, he was blessed with many friends. As most everyone knows, one of John's favorite past times was playing poker. Last month, he was able to play one final game with his family. He always treasured the time spent with his children and grandchildren, especially on Sundays. He left an indelible stamp on the lives of many of his friends, neighbors, and co-workers. The Elmira area will not be the same without him, but has gained in untold ways from his many years as a local fixture and positive force in the community. He will be deeply missed. A private family service will be held. Due to COVID-19, A celebration of John's life, and burial with full military honors, will take place at a later time. He will be laid to rest at Forest Lawn Memorial Park in early spring. Please share your memories of John, at www.mcinernyfh.com The family asks in lieu of flowers, please consider a donation in John's name to Chemung County SPCA, 2435 NY 352, Elmira New York 14903 or Elmira Animal Shelter, 842 Linden Place, Elmira New York 14901, he loved animals, especially dogs, to Alzheimer's Association www.alz.org, to help with treatment, prevention and hopefully a cure of this horrible disease someday, or St. Jude's Children's Research Hospital @www.stjude.org. Also, John's favorite events were Wisner Market and Elmira Downtown Clean Up, so consider planting a tree in memory of him through the tribute store, found on McInerny Funeral Home website.